AstraZeneca is partnering with Future Biogas to build a new renewable energy plant to generate biomethane as a substitute for natural gas to provide a renewable source of heat and power for AstraZeneca’s UK sites in Macclesfield, Cambridge, Speke, and Luton.

This initiative will provide additional renewable gas to the UK gas grid. Transitioning to fully renewable energy for heat and power is core to AstraZeneca’s Ambition Zero Carbon commitment to be zero carbon across its operations by the end of 2025 and carbon negative by 2030.

Under the agreement, Future Biogas will build a new biomethane plant in East Anglia, adding renewable energy capacity to existing UK infrastructure. Heat and power are critical to the manufacture of medicines and therefore decarbonising the healthcare supply chain depends on access to clean sources of heat.

Alongside clean heat and power, to achieve its net-zero goal, AstraZeneca will transition to electric vehicles, renewable electricity and launch next-generation respiratory inhalers.

The new Future Biogas plant will have the capacity to provide up to 125GW hours of biomethane, with construction due to begin in 2023. The plant will utilise crops grown locally to the site, supporting the rural economy. Feedstock crops are integrated into farm rotations and are grown on farmland that already forms part of agricultural systems. Adding feedstocks grown for anaerobic digestion into the rotation offers farmers diverse cropping opportunities which enhances the sustainability of the farming sector and supports the circular economy in the UK. Crops will be grown with regenerative agriculture practices, promoting nutrient cycling through wider cropping rotations, minimising soil disturbance to limit carbon release from soils, and helping to build soil organic matter and soil health.

Through the partnership with Future Biogas, AstraZeneca will access high quality bioenergy with carbon capture and storage (BECCS) through the Northern Lights partnership in Norway, a joint venture supported by the Norwegian Government. Carbon dioxide generated through the Future Biogas plant will be captured and transported to the Northern Lights storage facility, where it will be permanently sequestered 2.6km under the seabed. As a result, biomethane production has the potential to be not just net zero but net negative. 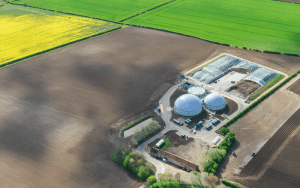 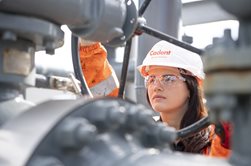